This article is about the game. For the cosmetic item, please see Brotherhood of Arms. 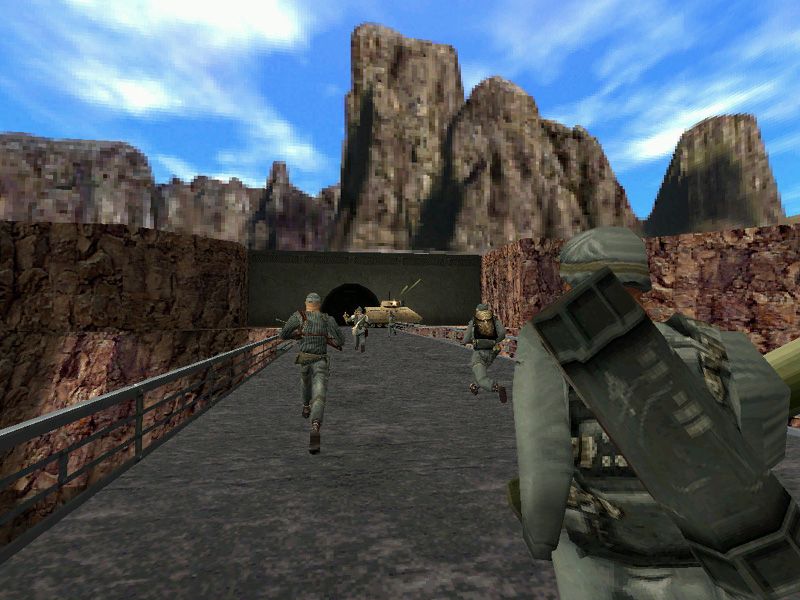 Gameplay would be radically different than the gameplay in traditional Team Fortress games. Many unrealistic elements, such as Rocket jumping and the Minigun, would be removed. Weapons would be based on those in real-life, such as the M16A2 and FAMAS. In addition, classes roles were to be more distinct; Medics would only be able to heal and revive allies, not attack the enemy base.

Because of the emphasis on realism, tactics used in real-life, such as suppressing fire, would need to be utilized if a team wanted to win.

The most significant change was to be a command system. In this system, there would be an invisible player called the Commander that would issue orders to the players on his team. This class would have a complete view of the map and could issue orders on the fly via text or voice chat.

Players would also have to get into squads, which would be lead by a player in a special class known as the Officer. He would generally lead an attack and would affect a player's morale. The higher the morale, the faster and more accurate a player is. This was done to encourage players to get together and move in teams. If an Officer were to die, the player's morale would reset back to zero.

Teamwork would be emphasized via combination. In addition to the previously-mentioned morale system, there would be other ways to make two or more teammates work together. For example, if there was a mounted machine gun in a map, one player could fire it. However, if another player got next to it, then the gun would fire much faster because the other player would be feeding ammo to it.

There would also be a limited amount of lives for each player, depending on the map. For example, Robin explained that one of their maps only gave a person one life; if that person died, he would've had to wait out the rest of the match.

Vehicles would play a role in the game, mostly as dynamic spawn points. They would also be parts of objectives in maps. Earlier builds had drivable vehicles, but this was scrapped so that the team could focus more on fine-tuning classes.

Map objectives were to be much more varied; in some maps, one team would attempt to destroy an objective, such as a bridge, while the other team would defend it. Some previews mention flags as well, which might have indicated that CTF would've returned.

Design-wise, maps were generally going to take place in real-life areas such as canyons (like Badlands), the Middle-East and Italian-themed areas. Urban areas are also shown in some early screenshots, but are absent in later ones. Most of the Italian textures ended up being used in Team Fortress Classic maps, such as Avanti.

One of the ideas used was that maps would be part of a greater storyline that the player could progress through.

The HUD was planned to be radically different than the TFC HUD. A live summary of what is happening would be shown scrolling on a part of the HUD like a news ticker, so as to keep the player informed. If the player is a Commander, then the news ticker will show the results of his commands.

A big part of the HUD would be a new navigational system. There would be a compass that would always point the player to the current objective. In addition, the map-maker could add waypoints that would show the player exactly where to go. One of the rumored abilities of this system was that if the Commander issued a new order, the game would dynamically change the compass and waypoints so that it'd lead to the new objective.

The only communications that would be shown is text and voice commands from your squads. This was done to reduce the amount of chat spam in large servers.

None of these HUD elements have been seen in screenshots. Some early shots showed a new HUD, but it seemed to display the exact same information that the regular TFC HUD did. Later screenshots completely discarded the new HUD in favor of a direct copy of the TFC HUD. One of the last screenshots released for this build showed a green version of the regular TFC HUD.

Team Fortress 2: Brotherhood of Arms was to use a variety of new technologies such as a system called 'Parametric Animation'. This would mesh various animations together so as to appear more realistic. For example, if a player dies while jumping in Team Fortress Classic, he would simply slump to the ground while in the air. In Brotherhood of Arms, Parametric Animation would make it so that the a person killed while jumping would go limp in the air, and would finally slump when he hits the ground.

There was also to be voice communication via microphones. In addition, the player's mouth would move while talking.

The game could also dynamically change the amount of polygons on models, depending on the scene. If a large squad of enemies were to attack the player, all model's polygon counts would be reduced to maintain performance. When the enemies had disappeared, the game would increase the poly count back to the previous amount.

There were to be 12 classes in the game; two more than the ten in the classic games. Most of the original classes reappeared, but were significantly altered so as to make them realistic.

There were to be a variety of weapons in the game; most of them based on weapons in real-life.